With carousel ads, you can highlight your product features, its benefits and attributes by using a sequence of image panels that serve to tell a compelling story.

Native carousel ads are available on desktop, mail and mobile.

Use up to 5 images (or a minimum of 3) to communicate the value of your product and drive engagement on Yahoo web properties.

A 3-card carousel ad sequence on the desktop is shown below:

On mobile, a 3-card carousel ad sequence looks like this: 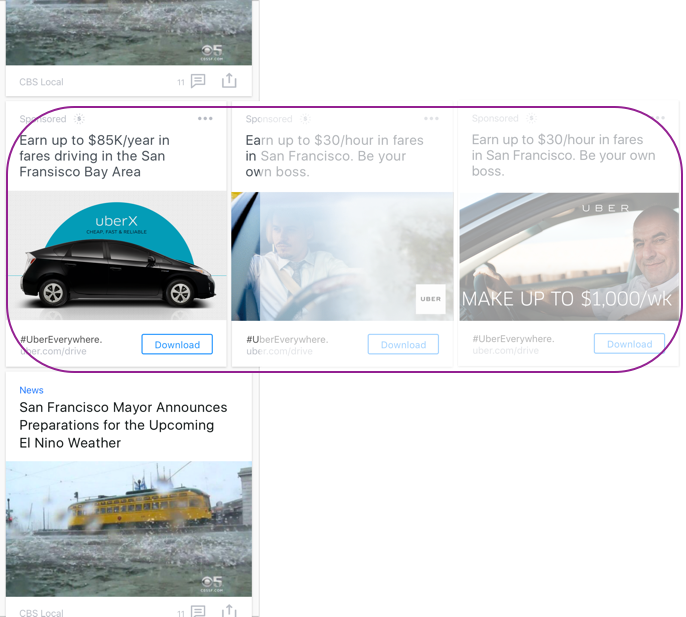 Once users click carousel ads, the following beacons are fired:

Creating carousel ads is straightforward and easy to implement.

In the Native Ad Platform UI, you: 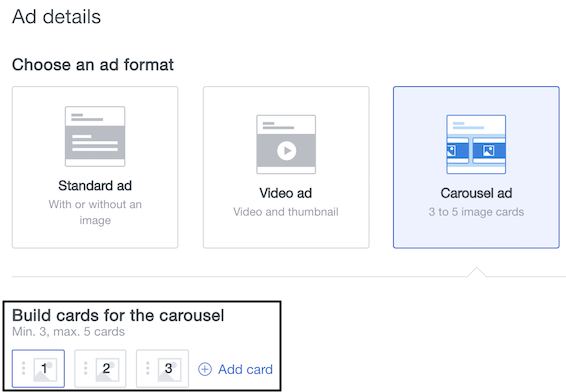 Carousel ads support both 1200x627 pixel and 627x627 pixel image formats. Only static images are supported, however, not videos. Each card can point to a different landing page URL.

Run Your Ad as a Single Image¶

If you wish to boost your campaign reach, you can choose to run your carousel ad as a single image.

Simply toggle the switch in the UI to turn on this feature, as shown below. 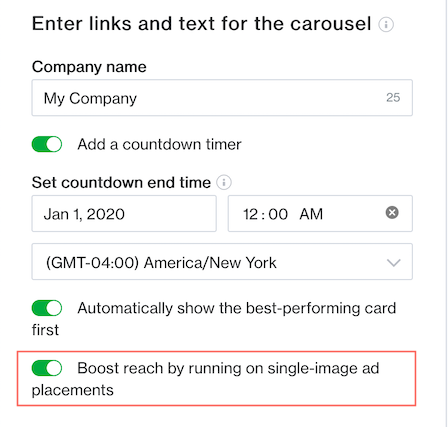 Once you do this, your carousel ad will serve as a single image.

To view the complete workflow for creating Native carousel ads in the UI, see Carousel Ad Workflow, which illustrates the process.

Reporting on how often each card was viewed, or engaged with is based on ad unit totals, not individual cards. Third-party tracking is allowed for each card.

Carousel ads will run on Tumblr and syndication inventory.

Support for bulk objects & types is provided with the addition of a new bulk object: Ad Assets.

For more information, refer to Bulk Ad Assets, which describes how you can create and manage ad assets, like carousel image cards, using the fields that are available for this ad object.

If you are working with the Programmatic Native Ad Platform API, you can find ad assets and JSON representations described in the section Ad Object.

The following FAQs are in reference to support for Video for Carousel ads.

Yes, video is supported in carousel for all users. However, video in carousel is only available on mobile. Desktop support is expected at a later date.

What pricing options are supported?¶

CPC and CPM. There is no change from current (static) carousel pricing models because video in carousel is a slot asset, not an ad type.

Because video in carousel is considered a slot asset and not ad type, existing carousel (static) reporting is used, so no video metrics are reported.

Will I be able to measure viewability through a partner, like IAS or Moat?¶

For now, since we are using existing carousel (static) reporting, 3P viewability for videos in carousel is not available.

What video sizes are recommended?¶

Videos can serve on any card, including multiple cards.

Will videos in carousel autoplay?¶

Videos in carousel will autoplay (while muted) when users are on Wi-Fi.

If I use videos on multiple cards, will they all autoplay?¶

Only one card plays at any given time. Videos in carousel will auto-loop at the end of the video.