The Verizon Media API provides you with the tools and resources you need to create, manage and retrieve advertiser data for your ads, ad groups and campaigns programmatically.

Developers are encouraged to take advantage of the API as mobile traffic continues to increase rapidly, with the majority of ads on Yahoo mobile search inventory being served by Verizon Media. Native advertising across Verizon Media mobile inventory is only available.

The sooner you participate in the Verizon Media API, the sooner the system can begin to build a performance history for your ad, so that your ad can earn better ranking and start getting you the clicks it deserves. As traffic ramps, your ad is then in the best position for cost-effective delivery and performance.

Who Should Read This Document¶

This documentation is intended for programmers who are developing apps to access Verizon Media content and search infrastructure. A prerequisite for working with the Verizon Media API is an understanding of HTTP, XML, JSON, and a cursory knowledge of query languages.

The roadmap for taking advantage of the Verizon Media v3 API is straightforward and easy to navigate.

Follow These Paths If You’re New to Verizon Media¶

Explore these topics that describe using the new Verizon Media v3 of the API.

The v3 API data model, shown in the diagram, is similar to the v2 data model, with objects created on the advertiser account level for shared sitelinks and shared sets: 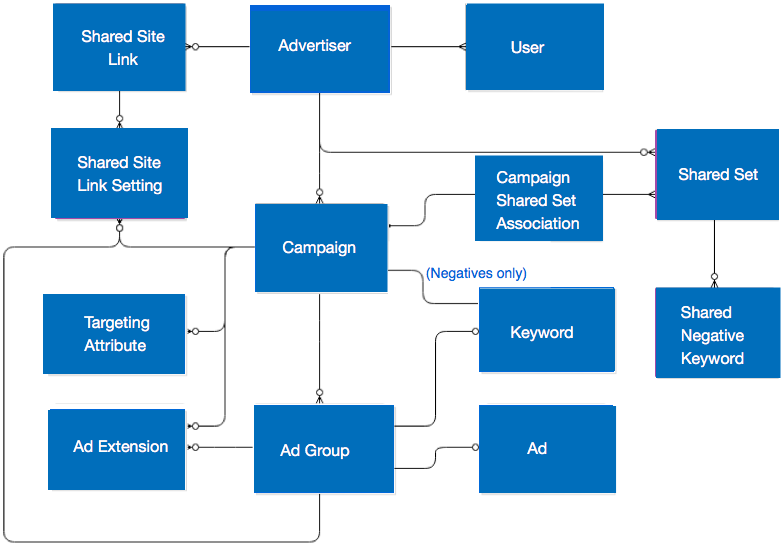 The v2 API includes the following objects, described in the table below:

The v1 API will be supported for 90 days beyond the June 1, 2016 deprecation date. After that date, starting on September 1, 2016, the v1 API will be available for one year. After that time, it will be relegated to End of Life (EOL) status. In addition, please note the following: New features will not be added to v1. Non-critical bugs will not be fixed outside of the 90-day window. Any significant, revenue-impacting bugs will continue to be addressed.