This article describes the DSP Traffic API and core traffic objects and their relationships.

The Verizon Media DSP enables you to programmatically monitor, create, and manage advertising campaigns via resources that are exposed through the DSP Traffic API.

Verizon Media DSP developers and partners can use these resources to manage advertisers, campaigns, lines, audiences, creatives, and more.

An resource is an object exposed through an endpoint. Resources are generally defined by multiple properties. These properties may be defined as integers, strings, arrays, or objects.

Verizon Media DSP advertising campaigns and configurations may be defined at several levels.

Most resources are defined at the seat or advertiser level and are available to child elements.

Digital advertising campaign components may be defined at different levels of the campaign hierarchy.

The table identifies the level in the campaign hierarchy at which various advertisting campaign resources and configurations are specified.

Many resources may be defined at both the seat leve and the advertiser level.

The Verizon Media DSP RESTful API specifies a set of objects that you can use to create, manage, and retrieve seat-level and advertiser-level traffic data. These objects are resources for storing and retrieving information about the various aspects of digital advertising campaigns.

The DSP Traffic API documentation is organized by resource. 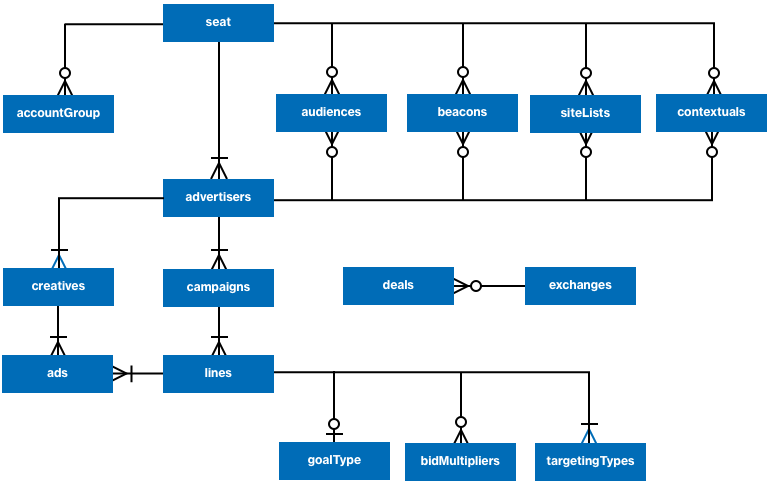 We recommend that you carefully study this diagram so that you will understand the relationships between DSP Traffic API objects.

The diagram is not comprehensive and does not show all resources available through the DSP Traffic API.

The ad resource identifies a creative that is associated with a line.

An account group is a set of advertisers grouped by region, brand, business unit, or another category that makes sense to your organization. Account groups are optional.

An audience is a collection of consumers with similar interests, habits, or online and offline behaviors. Audiences may be defined at the seat level or the advertiser level.

A beacon is an object that represents a standard code snippet that can be used to communicate information about how consumers interact with sites. Beacons may be defined at the seat level or the advertiser level.

A bid multiplier is a line-level resource that that specifies the relative weight that should be given to targeted ad placement opportunities.

A contextual is a resource enables advertisers to target consumers by matching their interests and habits with a publisher’s content–that is, the context of the ad placement. The contextual specifies multiple parameters that identify both the consumer and the ad context. Contextuals may be defined at the seat level or the advertiser level.

A creative is an object that defines the image or video asset that is the foundation of an ad. The creative identifies the file type (image or video file), the advertising environment (native or web), and the file hosting information (Verizon Media or third-party).

A deal is a set of terms reflecting an agreement between an exchange and an advertiser that is executed programmatically via a deal ID. Verizon Media DSP supports shared deals.

An exchange is the supply partners that is integrated with Verizon Media DSP via the OpenRTB API.

A site list is an object used to allow or deny apps and URLs for your display, video, and native ads.

A user group is a collection of users grouped together for the purposes of A/B testing.

The public names used for Verizon Media DSP traffic objects is sometimes different than the name used for these objects in the DSP Traffic API.

Throughout the DSP Traffic API documentation the name of the resource is preferred over the the public name. For example, the term beacon is used instead of the term pixel, which is used in the Verizon Media DSP console.

The table maps the public name to the resource endpoint.